HomeBlogInformationalTrisomy 18-Is your baby carrying too much? 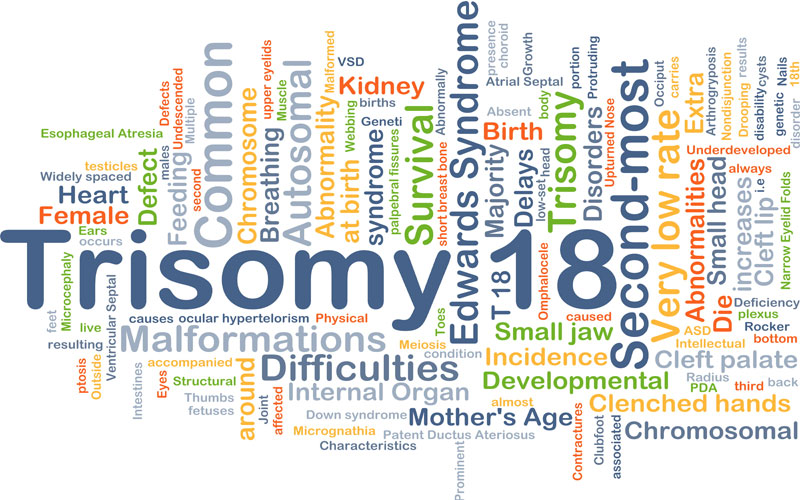 March is the Trisomy Awareness Month and we believe knowledge is empowering!

Trisomy 18, also known as Edwards syndrome borrows the name of John Hilton Edwards. Edward’s Syndrome is a condition wherein an extra of the chromosome 18 appears. It affects the normal chromosomal count of 46 in each cell of a healthy individual. Unlike Down’s syndrome, which also is caused by an extra chromosome 21, the developmental issues caused by Trisomy 18 are associated with high-grade medical complications that can be fatal in the early months and years of life. It is also the second most common chromosomal aneuploidy and is characterized by mental handicap, neurological and heart defects. The risk of trisomies and many other chromosomal aneuploidies increases with maternal age.

Incidence of Trisomy 18 is 1 in 3000 to 7000 births and is three times more common in girls than boys. Those who have an extra chromosome 18; there is no chance for 90% of them to survive beyond the first year of life. Taking into account the global trend of the average age of prima gravidae, a screening test to assess the risk of such disorders at early stages becomes a need. This is where tests like serum-based screening and non-invasive prenatal screening (NIPS) come into the picture.

Trisomy 18 is a condition, which is present in full, partial or mosaic form. The full form is the most common and in this form; every cell of the body is under influence of the infection. . Partial is when only a part of the chromosome 18 is present and mosaic is when only some of the cells exhibit the extra chromosome, both of these being very rare.

Prenatal Diagnosis of Trisomy 18 is important, because it allows the parents to check for the pregnancy management choices. NIPS first introduced in the year 2011 gained recognition in 2012, when the American College of Gynecologists and Obstetricians introduced a formal guideline for the same.

When it comes to pregnancy care and management; couples in most cases do not understand the significance of a screening test. Also, they never decide the subsequent need if any for a confirmatory test. With advanced genetic screening technologies in place, NIPT by NGS ensures 99% sensitivity is achievable with screening common chromosomal trisomies. Deciding the need for a screening test can vary depending on history, risk factors or even among proactive couples who believe in drawing informed choices.

NIPT introduces the convenience of genetic testing using venous blood sample of the pregnant woman. Hence We call it as a superior screening mode. It helps to determine the need for invasive tests like Amniocentesis or Chorionic Villi Sampling (CVS).

“Chromosomes can go awry, even without a history, but tackling all odds becomes possible with a timely NIPT”